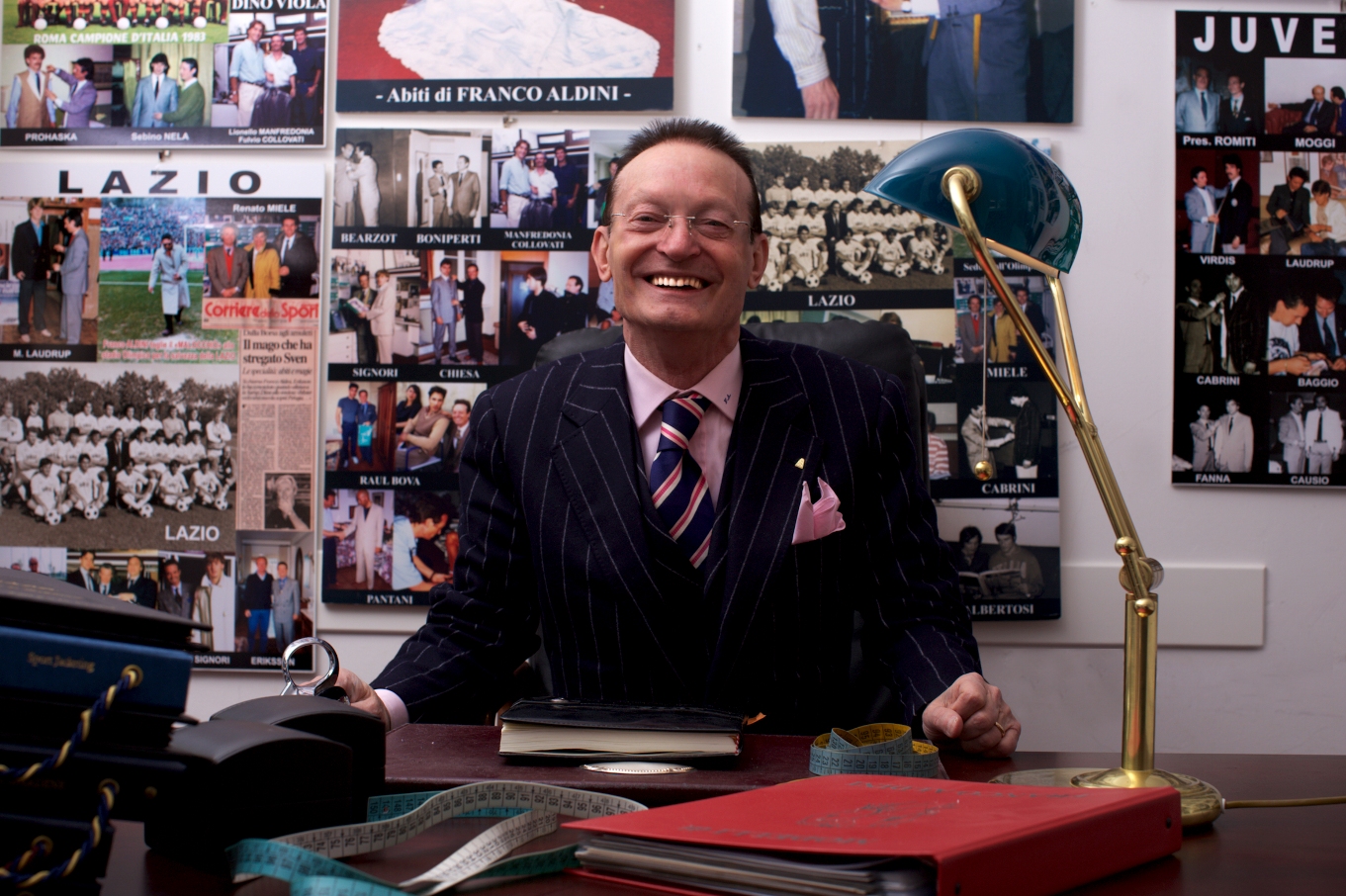 I was born in Rotondi, an outskirts of Naples area, at post war time: poverty and hardship had signed my childhood; when I was 10 years old I used to commute from Avella (AV) to Naples, just to work as taylor apprendice and learn tricks of the trade. I used to wake-up at 5 a.m. and came back later than 10 p.m. , founding my mother awake, serving the only meal of the day.

When I was 17 I moved in Rome to work for the Atelier Angelo Litrico, a great master who refined my taylor’s art. there was not easy time as well: i shared a room with 4 people paying the rent with customers tips. After the national service I opened my first Atelier in Pomezia and later in Rome, where i met Anthony Quinn becoming his personal taylor for 35 years, and work for the movie “The Mayor” of Pupi Avati directed by Ugo Fabrizio Giordani.

I had made suits for all football players and coaches: from Diego A. Maradona to Juan Sebastián Verón, Hugo Almeida, David Platt, Sven-Göran Eriksson, even for the goal keeper of our national team Gianluigi Buffon. I have got a strong friendship with Enzo Bearzot, Carlo Ancelotti, Giampiero Boniperti. I had work for great sportsmen as Pietro Mennea, Marco Pantani and many many more.

It was such an honour make suits for Massimo Troisi or met great actor like Ugo Tognazzi.

I’m proud of my foto gallery with so many staras, because I like to go further a simple “make a suits” for my customers: been at ease, familiarity and friendship are my usual practice to fit a suit.

Among the characters that I dress cite:

How I came up with the idea of “watch holder cuff”

It was a warning sunday of april in the 1986, I went at the football stadium with some friends for a Juventus match. I was sat on the box seat, when I spotted “the lawyer” Gianni Agnelli sitting not so far from me. He spent most of the time piddling with his watch: he was trying to hold it on his shirt cuff, as he was usual to wear. It was at that time I got a terrific idea; back on my atelier I made the prototype of the “watch holder cuff” and I protected with copyright on 28th of May 1986 with registration number n°35854B86.

I made a shirt with the “watch holder cuff” for each of the Juventus players so to thanks “the lawyer”. I was surprise to receive a mail from Gianni Agnelli who was greatfull to receive a shirt so confortable just suited for him. The shirt with the watch holder cuff has the practicality to exhibit your watch, let separate the watch band from the skin, so to avoid allergy or fade color. It i salso a long life saver for your shirt because avoid wearing down the edge of the cuff.

Many stars has worn shirt with watch holder cuff in many shows “Pronto è la RAI” with Magalli, “Ora di Punta” with Mara Venier, “Uno Mattina” with Maria Teresa Ruta. Also Anthony Quinn was so impressed by this idea that I became his personal (and family) taylor.

Many trade magazine about fashio and watch such as “L’orologio” , “La Clessidra” and “Vogue Man” had promoted the shirt with the watch holder cuff because it stand out thanks to its elegance touch.

I Always have been produced and distributed my clothes with great dedication, and I’m studyng the way to impress my customers with the next creation.